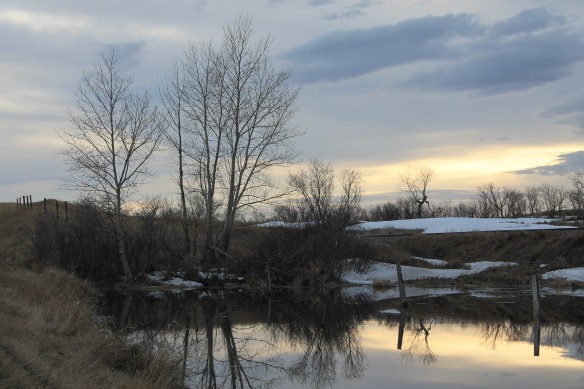 Maybe it’s because it’s so hard-won. Spring on the prairies is a celebration, or perhaps better, the hush before the celebration. When I stepped out of the car I could hear a meadowlark somewhere, and almost nothing else, except the wind rustling winter’s bones. There is something both calming and sobering about a landscape where human beings have so little say. Ronald Wright, in his book “A Short History of Progress” tells us that however we pride ourselves in our technological prowess, nature always wins. On one of the first days of spring on the Canadian prairies, it’s easy to see his point.

I just read that the third in what has become The Hangover movie franchise comes out soon. Will it be another crazy-night-out-with-disastrous-consequences narrative like the first two? Maybe not, since this one is touted as the series closer.
But the pattern is familiar enough to us. ‘Boys behaving badly’ is a familiar trope. The stories we tell ourselves are of men as grown boys with only the thinnest veneer of self-control and respectability. Scratch that suit, add alcohol and a night at the strip club and presto! Beneath every nice 30-plus male grins a farting, leering, over-sexed frat boy who can, after all, hardly be held responsible for his actions.
‘Twas always so, we think.
Or was it? I’ve been reading ancient authors like Philo for a chapter I’m co-writing on ancient debates on circumcision, and there’s an interesting pattern in the sources. In the ancient world, it appears, the sexual sides were the opposite of today.
Instead of women being the clear-minded goddesses who hold the keys to sex and must fend off the advances of men who always ‘want it’, in the ancient world the roles were reversed. Men – calm, cool, rational men – had the task of keeping the vacillating, sexually-charged, hot-headed women at bay. Instead of ‘boys behaving badly’, it was women who were considered more likely to listen to their privates than their brains (or their hearts, since that’s where thoughts were sometimes believed to originate by the ancients). I’m not writing this to prove any particular point about men or women; only that what we sometimes think of as ‘natural’ is more cultural and learned than we think. And I enjoyed The Hangover.  I’m not quite sure what an ancient version of that movie would look like. But one thing’s for sure: if the ideal first-century male woke up after a crazy night in Vegas, he’d remember everything.