As I leave the village of Kirk Yetholm, striding up toward the bare yellow hills of the Scottish Borders, I walk past a sign announcing The Singing Donkeys Hostel and Soup Kitchen for the Soul. It is hand-drawn. I stop despite myself, and think about singing donkeys, trying to remember if I’ve heard anything overnight that might be a braying animal. All I can visualize are the Bremen Town musicians, and I’m pretty sure they didn’t mean that. The sign, and the motley collection of boots underneath, conjure other images between memory and imagination, that I realize are probably not accurate even as they keep floating to mind: a young man in Rasta hat and beard, stirring soup in a communal kitchen, long and lazy afternoons in the sunlight with indistinct plans, someone playing guitar in another room and the sweet-sour tang of pot drifting in an open window, the feel of sex in the air, dream-catchers and crystals and Buddha prayer corners. A part of me wants to knock on the door, tempted by whatever “soup kitchen for the soul” might mean. But it’s too early in the day to begin detours, real or metaphysical. I wasn’t a hippy even when there were hippies. Although my bed at the Borders Hotel was too soft and the beer too tempting, it felt more like home. I take a photo and move on.

Months later, back in Canada, I read in a book about the St. Cuthbert trail that the hostel in Kirk Yetholm was, centuries ago, built as a schoolhouse for gypsy children.

As I’ve discovered on pilgrimage, morning inevitably means climbing. It’s 8 am and the sun is already feeling just a touch too warm for what I had only ten minutes before decided would be perfect wear. Upset with myself, I strip off a layer of merino wool and add it to the weight in my sack. This portion of the trail coincides with the Pennine Way. Probably because I’ve read accounts from those who’ve walked the Pennines, and every story stresses how difficult the path is, I keep expecting to be overtaken by long-legged, weathered, grim-eyed hikers, a different, hardier species, even though I’ve been averaging 25 km a day myself. There is a Pennine Hikers’ Inn, to my surprise looking much more luxurious than my Borders Hotel, and then a corner marked, mysteriously, Halfwayhouse. Half-way to where, I wonder? And where is the house? There are sheep everywhere, unfenced and curious, but no sign of human life. And oddly enough, no walkers, even though this is supposed to be one of the busier parts of the route.

Something happens in the mornings when you’ve been walking day after day: you begin to get eager – almost impatient – for the rhythm that sets itself up in your body after a kilometer or so on the trail. It’s something that stays on, most evenings, even when you’ve dropped your pack for the night and had your solitary meal, when you’re lying in bed trying to remember what day it is and why you were so stressed back home. Maybe it’s a rhythm of breath, or of the feet, or of both. There’s something in it of feeling your lungs tighten under the pressure of taking ever-larger breaths to handle the climb, or noticing the increase in heart-rate, knowing without any doubt that it will drop again as soon as you’ve taken a moment to rest. I’ve read that happiness is doing what you’re designed to do. Humans are designed to walk.

It’s probably that happiness that leads me up the first big hill of the morning, an imposing bare challenge of a knoll planted right in front of the road. The hill is called Green Humbleton on the map, had I been smart enough to look at my map. It’s only 268 meters, but when what I’d thought was the trail becomes indecisive and finally peters out about three-quarters of the way up, I assume that the cairn of stones I can sort-of see is my next marker. The way goes neither left nor right, and so neither do I. The top quarter of the hill is steep, so steep that at times I’m forced to scramble on all fours, burrs and seed spears digging into my soft palms. Bottle flies sit in black swirling columns of air that I pass through, forcing myself to breathe in through my nose so as not to inhale too many insects at one go. Horseflies discover the exposed flesh of my arms and legs, wet with sweat and red with exertion; I swat as best I can, but each swivel, because of the weight on my back, threatens to tip me over. When finally I stand at the summit of the hill, the warm gusts of wind are a blessing.

But there is no trail down. I sit for a second to catch my breath and scan the hills for the trail from which so clearly I’ve strayed, but sitting is just an invitation for more horseflies, and I’m bitten twice. So I stand again, and begin the descent. I’m a bit jittery, the way the weight of the pack jolts with each footfall, and with a mild curse at myself for almost making a mistake even worse, I slow down. This would be the way to lock a knee, or step in a hole. Eventually, I spot a sign to my right. The path has wisely sidestepped the hill. I’m happy to be on it again, even though it rewards my happiness by leading, honestly this time, straight up yet another rise.

In the morning, setting out, I’d asked an older woman where the path out of the village began. She’d looked at me in silence for a second, as if debating whether to answer, and then stretched out one arm, almost like a curse, to point at the hills. “That’ll be for the likes of you, walking,” she’d said. Then she smiled.

I remembered that when I reached a gate in a stone fence. There’s a sign. It reads, on one side “Welcome to Scotland” and on the other “Welcome to England”. I open the latch, and step through to another country. 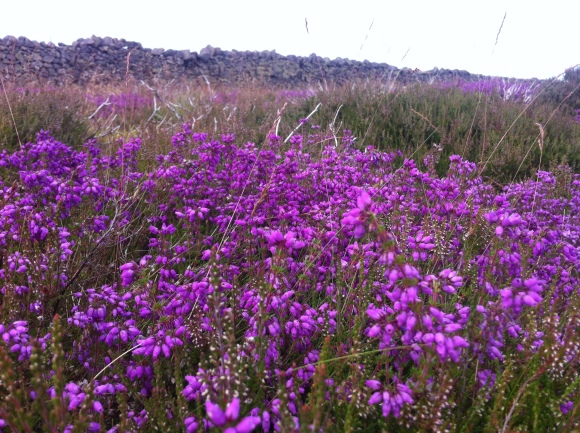