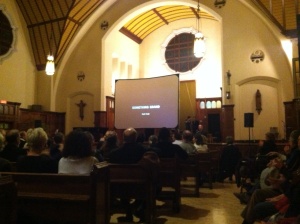 They say we’re our own worst critics. I suppose in one sense that’s true. But it’s also a strange and not very comfortable feeling to stand in the semi-darkness at the back of a crowd of people while they’re watching a documentary you’ve been putting your heart into for months, waiting for what they think.

Monday last, on November 19, I had the Concordia University premiere of “Something Grand”. Tons of people showed up; estimates were just shy of 200. We filled the place. Those of us who’d organized the evening – thanks Adan! – kept pinching ourselves as more and more came through the doors. To our amazement the floor chairs were soon full and we were putting viewers into the balconies. Many of the faces were familiar, but not all. Certainly I’d pulled in all the friends and family I could. But there were many, many more as well – students, professors, Camino walkers who’d heard about the film on the radio, others who knew of it through contacts or posters. Three of the pilgrims I’d interviewed in Spain came to Montreal for the premiere. M, from Georgian Bay ON, came with her husband. And the delightful (and fabulous) S and J put on their premiere outfits and diamonds and looked like they could have been walking down a Hollywood runway. They’d come all the way from Florida just to be there with us and acted every inch the “celebrities”.

Luke, the musician we’d hired to play spanish guitar, was excellent. The speeches were….well, they were speeches…but some managed to point quite well to what pilgrimage really is, and the importance of studying this exceptional social and spiritual revival. When the lights finally dimmed, there was a buzz of excitement in the room. Or maybe that was the butterflies in my stomach.

We spend so much of our lives learning to avoid being vulnerable. In elevators and on the street we keep our eyes to ourselves. If we allow ourselves to cry at funerals or films it’s discreetly; we hide our tears. The word “sensitive” isn’t a compliment. But then we try our hand at something “creative” or “artistic”. And surprise, surprise: we then discover that in order to make something good, or true or beautiful we HAVE to open ourselves up to others. We have to FEEL with them. And we have to make ourselves vulnerable too – and show our dreams, ambitions and flaws. Which is to say: we have to risk.

The premiere was a smashing success. Now I want more people to see the documentary. Its strength is clearly not its technical aspects (despite some miracles of editing by M, Z and P). It’s in the relationship I had with the people I interviewed. The author Jonathan Lear, in his book Radical Hope, says that we human beings are “born into the world longingly”. One of the things we long for is real, genuine contact. Both the documentary and the premiere offered a glimpse of that. And that is worth all the vulnerable risk in the world.