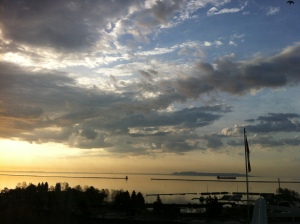 “Didn’t you know?” asks the woman beside me, “the Sleeping Giant won the peoples’ choice award for the greatest wonder of Canada.” She sits back, folds her arms over her chest. “Beat Niagara Falls by miles, although the organizers had to give first prize to the Falls just on principle.”

My seat-mate is a chatty, attractive, dark-eyed young mother who can’t say enough good about Thunder Bay, home of the Sleeping Giant. She tells me about her husband (a gem of a man. Very busy. He’s starting his own business), her kids (they’re good kids. A bit fussy eaters at this stage but I’m sure they’ll get over that), her weight problems (I need to get back on my cross-country skis so I can get rid of this, patting her stomach) and not least, her town (I’d never move anywhere else. Thunder Bay has everything I need. I lived in Ottawa for two years. I was miserable).

She’s hardly the last to tell me about the Sleeping Giant. “Have you seen the Giant?” asks Jari when he picks me up at the airport. He wrestles the car through lane changes, giving a cursory history and geography lesson of the Lakehead in a gunshot, growly accent I’ve grown accustomed to hearing. He cracks jokes constantly, but sometimes won’t smile, glancing sideways at me to see if I get it. I’ve learned that humour is often a test of intelligence amongst Finns. Despite their dour reputation, they have an affinity for a finely-tuned, ironic sense of amusement.

Jari is an enthusiastic host but a distracted driver, and points out landmarks with abandon until finally we are turning into the old town of Fort William. Even as I’m making the connection from the street-sign, Red River Drive, to the fact that Thunder Bay points west as much as east, there ahead of us is the Giant. No I hadn’t seen it before. No matter. There’s certainly no missing it. The long silhouette of gray granite rises out of glinting Lake Superior in the middle-distance like an eastern sentinel over the Lakehead. The formation really does look like a giant on his back, arms folded.

I’ve come to town for a Suomi, or Finnish, conference of the Lutheran church. This means that for four days I will be spoken to in a language that is so exotic, so difficult and rare, and has such deep roots in old Norse traditions, that Tolkien adopted it as the language of the Elvish inhabitants of his fictional Middle Earth. Many of the elves look a bit like Finns. Or the Finns, perhaps, like elves. Beyond “good morning” and “thanks for the pulla” – a Finnish sweet bread – I haven’t mastered this strange tongue. Although I’ve learned to sing it reasonably well, the words remain a mystery to me, and even when complimented on my pronunciation I’m never sure if I’m actually invoked a blessing or recited a shopping list. Over the four days of the conference I’ve been assigned jobs, most of which involve speaking in English, showing my documentary, eating Finnish specialty foods, and making various forms of music. In other words it’s a perfect conference.

They don’t say “Finnish” here, as in “I speak Finnish”. It’s shortened. “Do you speak Finn?” Maybe that’s more accurate, because there’s a whole culture on display at the conference. It’s not exactly Finnish and not exactly Canadian, a hybrid culture of Canada and the old country that’s aged together with these older immigrants. Many of them are senior citizens who came to this land over fifty years ago now, but still sport names as thickly Finn as their accents: Pirkko, Eili, Tuula, Ritva, Markku, Olavi, Jari.

“Does the Sleeping Giant have a name?” the driver of the yellow and black, slightly beat-up Roach’s Cab repeats my question before answering it. “Yes, his name is Nanabijou. The legend is that he was a Native warrior who made the mistake of telling the white man where to find silver. So white men stayed in this country, and as a punishment the gods turned the warrior into stone and put his head right beside the silver he showed the white man.”

The taxi driver, definitely a non-Finn, answers my question with a question: “how long you in town for?”

When I tell him only a few days he shakes his head. “Too bad. I’d take you out in my boat – it’s a beauty, a thirty-footer – and you could see the flooded mine shaft for yourself. Water’s clear as crystal, a big black hole near the giant’s head.” I promise to look him up next time I’m in town.

To my mind, Finn hymns are some of the most beautiful ever written. But perhaps that’s because I have a taste for minor keys and wistful, elegiac melodies. The hymns can be as dramatic as the people are not. “Sure they’re beautiful,” says someone sitting beside me during the choir practice. “If you’re prone to depression.” Then he glances sideways at me.

The first day I wander along Thunder Bay’s developing waterfront, where you can smell municipal and provincial development funds and the hope of better to come. There is a sort of urban life here, but it’s just beginning. Where in Montreal or Toronto such a view would mean streets crowded with terrasses and tourists, the sidewalks here are largely empty and the evenings silent, except for the odd walker returning from the local McDonald’s.

For the next two days I’m busy with the conference and barely get back to the harbourfront. On my final day an elderly Finn, Eepu (one of the disconcerting things for a foreigner about Finn names is that it’s hard to tell what gender they are. Eepu is an elderly man) takes us back to our hotel before we go to the airport.

We are heading toward the bay when Eepu does something entirely unexpected: he pulls out a harmonica. Still driving, he begins to play. His gnarled right fingers hold the instrument close as a lover, and from it come the most beautiful, sad melodies, tunes you might dance to, but only the final dance of the evening, before parting forever. I think that Finn folk music sounds a bit like tango.

Just then we crest the hill, and there before us are the 250 meter-high cliffs of the Giant. As I marvel at the sight, Eepu launches into Finlandia. Everyone is silent. Sibelius’s sad and noble melodies fill the minivan. There is a curve to the left and then the right, a left turn, and with the final notes of the anthem we are at the hotel.

Eepu gets out to hand us our luggage. Most of the passengers speak Finn and there is a chorus of kiitos (thank-yous), and a few hugs. “Thank-you,” I say to him. “The music was wonderful.” He shrugs his shoulders. “Sure,” he answers. “If you like that kind of thing.”