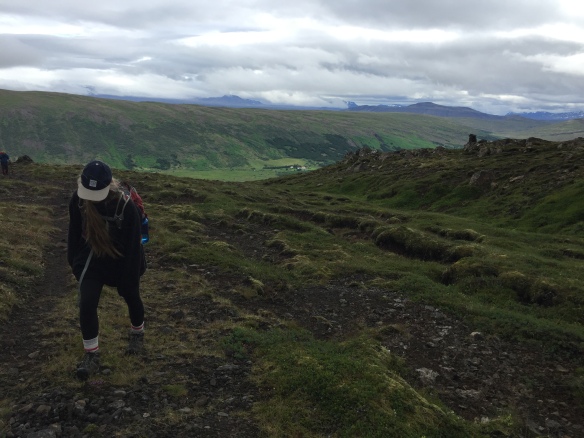 on the subject of – what else? – western Christian pilgrimage (clink on the following link) https://vimeo.com/183303404

Bare details don’t tell it all: Bær to Lundur, 17 km, Oddsstadir to Fitjar, 12.2. There is a map, but no obvious trail. Elínborg, Hulda and Floki, with few others, dream of a trail walked by Icelanders and others, to mark faith, and history, and friendship. They have planted posts over the years to help guide the way. But unlike the Camino, unlike even St Olaf’s, here there is rarely a visible path. A Spanish poet wrote that “the way is made by walking”. And isn’t that the way it is with life? The way is made by walking. And so is the trust, and the faith, and the community, and the hope. And the pilgrim. 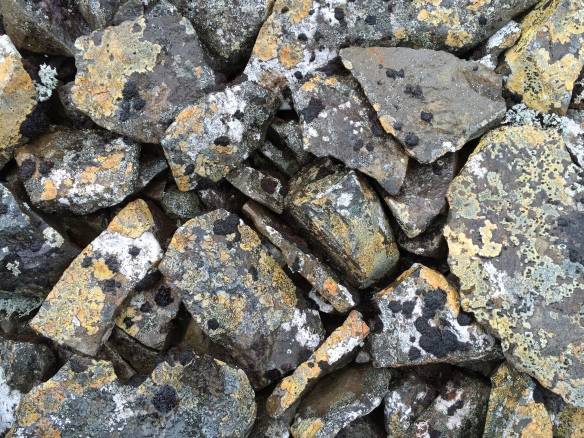 Somewhere between Hvalfjördur and Thingvillir (the double ‘l’ pronounced with a d/t sound, thus Thing-vit-leer) we were drenched in mist, rain, and mud. And, since our day ended up being an almost 30 km scramble over what the Icelanders call ‘leg-breaker trail’ (Leggjabrjótur), by the time we were done we were sore and wet and cold in every possible way. And dirty. When my daughter looked at some of the clothes we’d been wearing, she coined the term: pilgrimage-gross.

Which got me thinking about appearances, pilgrimage, Icelanders and North Americans. Nowhere we stayed had the kind of full-length, or even half-length, mirrors so common in North America. There was a kind of self-acceptance and natural toughness to the Icelanders with whom we walked, an easy gracefulness that seems to come from closer contact with the natural environment. What’s more, I noticed that the folks we set out with became more handsome and beautiful as we shared the trials and the trail together. So even though our clothes (and especially our boots!) became progressively more ‘pilgrimage gross’, a kind of ‘pilgrim beauty’ shone even more through the mud, mist and cold, and was everywhere present in the people and the land.

My short TV appearance on Icelandic TV, filmed at the end of our walk (at the end of the report in Icelandic)
http://www.visir.is/-gengu-berfaett-sidasta-spolinn-i-pilagrimagongu-/article/2016160729463
I was feeling somewhat exhausted when CBC Radio One’s All in a Weekend called me on the trail for a follow-up interview while we were high up on ‘bone-breaker’ trail after having been briefly lost in the clouds (by the way, Gabriel had to shout out to me how to say “bye” in Icelandic, but they cut that part). The “troll” comment was a reference to the big, happy rock-and-roll guy! #thingsyouwishyoucouldtakeback

There was also an earlier interview on CBC radio about Iceland, just before leaving:

Concordia (and theological studies) has been getting some good coverage out of the 2016 Icelandic pilgrimage! 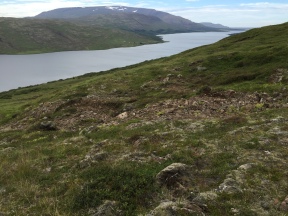 Day two of our pilgrimage through Iceland: We’re sitting, eight Canadians and ten Icelanders, at one long table. Our host, Hulda Gudmundsdottír, who has put us in her renovated barn (barn being a word that hardly describes the luxury of the place) comes around as we finish our meal of lake trout, potato salad and greens. Did you like the fish? She asked. I went out and caught it with my son in nets, three days ago.

The fish is only one of the wonders of this place. Elínborg Sturludottr led us along the prestergatta today, the priests’ path from the small church where we had our matins (morning devotions) to the even tinier church where we had our vespers (evening devotions). Our other priest guide, Floki Kristinsson tells us that the morning church was built on the site where Rudolf, the English monk who had accompanied St Olaf up to his death in 1030, came that same year to Iceland and started the first monastery. The Icelanders are a fun group, their humour in contrast to the starkness of this land. For the first time today, we came across what we Canadians call real trees. The Icelanders told us: what do you do if you’re lost in a forest in Iceland? Stand up. At which they laughed uproariously. We climbed up and out of the fjord this morning, 1000 feet, and came down the valley to this beautiful lake setting. In passing we were offered an unexpected afternoon coffee and some sort of sweet flatbread, by an Icelander who is interested in our pilgrimage. This place, including the people, is truly a place of wonders.

An extra treat on this blogpost: fellow pilgrim, Ásta Camilla Gylfadóttir, reads a short Icelandic folktale titled: The church builder at Reyn. Click on this link for her lovely diction and accent!

July 2016 interview with CBC Radio One Montreal show ‘All in a Weekend’ hosted by the gracious and thoughtful Nantali Ndongo, about my pilgrimage to Iceland: http://www.cbc.ca/news/canada/montreal/programs/allinaweekend/pilgrimage-to-iceland-1.3692347 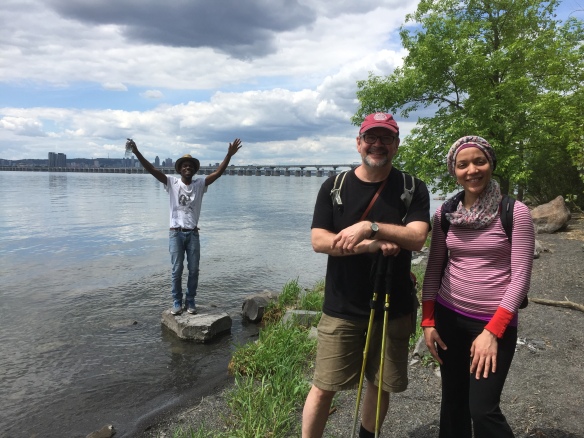 It’s been over a month now since I joined Prof Sara Terreault and her class for the third annual pilgrimage between Montreal and Kahnawake Mohawk Territory. The students were fantastic – interesting and interested, willing to learn and to dive into anything (even, sometimes, the water). Jihad T was a student in the class and was gracious enough to join me for two interviews, one in French on Radio-Canada (see the “interviews” link above) and the other in English, on CBC One’s ‘Home Run’ program. Thanks to M, who made the interview available to us! Have a listen! 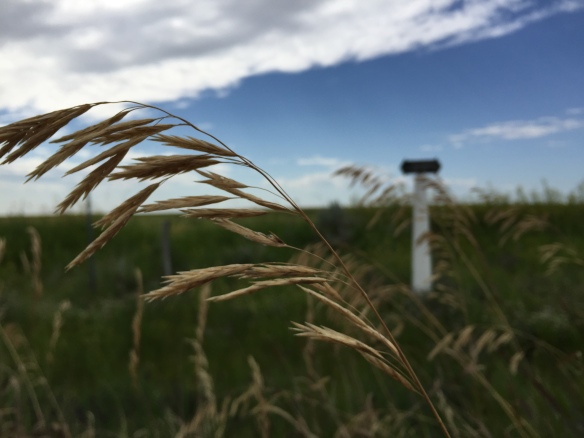 For I have learned

To look on nature, not as in the hour

Of thoughtless youth; but hearing oftentimes

The still, sad music of humanity,

Nor harsh nor grating, though of ample power

To chasten and subdue. And I have felt

A presence that disturbs me with the joy

Of elevated thoughts; a sense sublime

Of something far more deeply interfused,

Whose dwelling is the light of setting suns,

And the round ocean and the living air,

And the blue sky, and in the mind of man

this is the second part in Sara and my discussion of pilgrimage, where we focus on the differences – and similarities – between pilgrimage and tourism, and Sara introduces the ‘Grand Tour’ 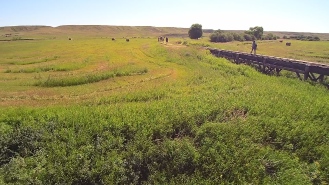 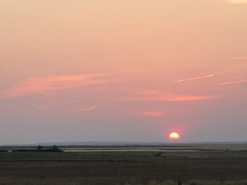 (this is a guest blog posting on postmodernism and pilgrimage, by Sara Terreault, my friend and pilgrimage studies colleague. Her thoughts were inspired by the questions and comments posed by another of our friends and colleagues, E. Moore Quinn. Their back-and-forth conversation was too good, and too detailed, to leave in the comments section!  MA)

Fancy meeting you here: do you come here often? 🙂

Great questions.  I should be grading papers but cannot resist jumping in.  Here goes, a few note-form thoughts in response to your thoughts:

1) “postmodernism (cultural orientation)/postmodernity (historical time period)”: well, literally “after modernism/modernity”.  So applies to cultures that have been shaped by modernism (or in short, the so-called “Enlightenment Project”), but have grown suspicious of modernist assumptions and values, so

1a) Enlightenment Project, a meta-culture (birthing the so-called universalist  “metanarrative”) consisting of : i) anthropology: human person as primarily (or ideally) interior, individual, rational, and, once freed from the tutelage of superstition (incl “religion”) capable of solving all human issues by exercise of rationality); ii) epistemology: rational, objectivist empiricism, privileges scientific method;  iii) ontology: materialist, immanentist.  Implications: the eclipse of the transcendent, the spiritual/religious, the affective.
1b) Romanticism (late 18/early 19th c.) a reaction/response to the hyper-rationalism of the Enlightenment, but which nonetheless retains the individualist interiority of Enlightenment anthropology … however privileges affectivity, intuition, arts and artists, rather than empiricist rationality and science.  Romanticism has an ambiguous relationship to “religion” and I think we can see there the roots of the contemporary postmodern “spiritual but not religious” (re-opens the door to the re-entry of transcendent reality, but not through traditional “religion”).
1c) Finally: postmodernism: disparate cultural movements that have challenged the assumptions and values of the Enlightenment  and  to some degree Romanticism.  It is paradoxically both hyper-modern and anti-modern.
1d) postmodernity: When is this? This will be endlessly debated, but it makes sense to me to place this post WW2, when all the certainties of modern hopefulness in humans and their “brave new world” lay in ruins after the horrors of two world wars, genocide, totalitarianism, atomic weaponry: our lovely individualist, scientific rationalism has *not* saved us after all. Now what?  Western (modernist) culture fragments into many small cultures (mini narratives) privileging the local, the plural, the diverse, the contingent, the social
2) Shrines, relics, pilgrimage and postmodernity: I’ll suggest that the “shrine” is the in-dwelling place of the divine, “relics” are the meaning-imbued and empowered material memory of the holy one (saint) and the holy experience (in this case, pilgrimage); and “pilgrimage” is physical (or in some cases only spiritual) journey for and to self-transcendence.
2a)  i. The shrine may indeed be spatially located, architecturally realised.  But it is also (at least in Christian tradition) interior, spiritual and personal: “You are the temple of the Holy Spirit” (1 Corinthians).  For postmodern people, the secularity of modernity means that attachment to and experience of traditional religion is often thin or very thin.  Yet the desire for and valuing of the transcendent is nonetheless strong, but is expressed largely privately (religion having been banished from the public square).  So the interior understanding of shrine is “natural” to us postmoderns (we are perhaps just a little bit gnostic in our tendencies …).  We may structure our spirituality on aspects (and in the case of pilgrimage), on locations of traditional religions) but we do this largely individually, partially, and with great focus on interiority. ii. peregrini:  I totally agree that postmodern pilgrimage’s “interior shrine” is in many ways like that of the Celtic peregrini pro Christo whose pilgrim journeys were not toward any wrldly centre, that is toward any spatially/materially located shrine, but rather away from the “centre” of the earthly home, familiarity, comfort etc. Their “destination” is not spatial/material/earthly but rather eschatological, and their only earthly material shrine is their own pilgrim bodies. iii) Relics: the material and sacramental traces of holy people, places, memories.  Not a long way from a strand of hair in a locket, or a pilgrim badge or tattoo, or a burden stone to be left on the road, or a postcard or souvenir …
Your further thoughts?