Today was a wet, wet, cold and rainy day. We walked from Maybole on a highway in the rain, which never really stopped. We’ve found everyone here very, very, friendly: 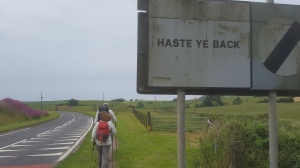 After some country trails we came to Kirkoswald, a village named for the Oswald Church that sits on the overlooking hill. The church, like so many other places we’ve seen in Ayrshire, boasts a connection to Robbie Burns, who spent one year of schooling here (why only one? The sign doesn’t say). Robert the Bruce was also baptized here. The building was designed by Robert Adam, who was building a nearby castle at the time. He put two swans on the corners for the founding family, the Kennedys (you can see them below). 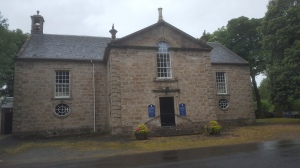 Swans are a good theme for the day. We walked toward the coast, into increasingly foul weather. Due to some overly vague directions, we got lost, swam through a field of wet barley and then were covered with nettle and bramble stings trying to get back to some kind of walking path.

On arriving at the Ayrshire Coastal Path I saw swans sitting placidly in the tossing sea, head into the gale winds. So that’s what we did too. By the time we’d reached Girvan we were soaked right through to the skin. Then some. I was shaking with cold.

But life will always win out, as this little patch of green pushing up the asphalt proves. And we did too, persevering until we reached Girvan. We were dripping pools of rainwater on arrival. 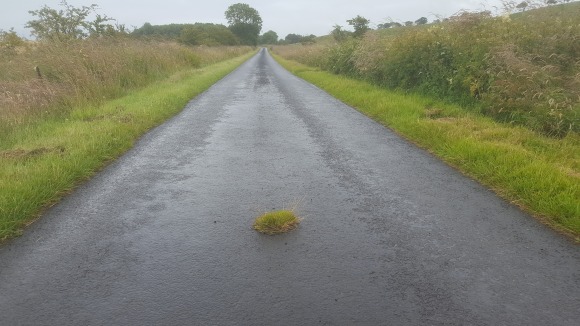 Tomorrow is supposed to be another Scottish-soaked day. Here’s hoping our clothes dry enough overnight to be bearable after breakfast. I’m VERY thankful, now, for this warm room, some tea, and some time to relax out of the wind and rain. In the window of a house we passed were two small swans to greet those on the sidewalk. From my window right now I can see the fog-lights winking on the mountain in the sea, Craig Ailsa, which  accompanied this portion of our journey (when the rain lifted enough for us to see it).