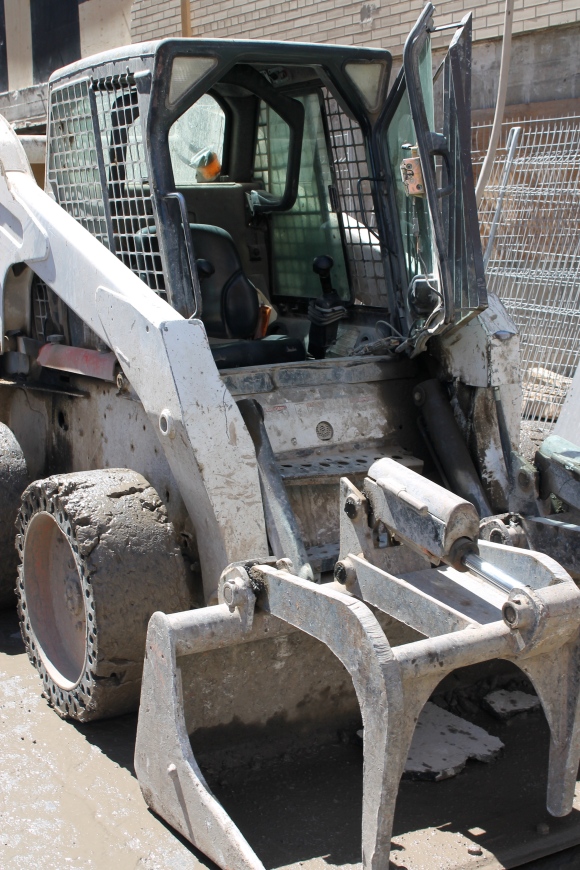 After about a half-hour of conversation with my visitor I get tired and notice I’m thinking about my bed. Not that I’d go to sleep exactly; just lie down awhile and let my mind go blank. “Oh don’t worry,” says the nurse, who calls me later. “That’s normal. Goes with having surgery and general anaesthetic. Your body has gone through a trauma. Every day you’ll get stronger.”
She’s right. I am.
The nurse was helpful, but all quick questions and firm reassurances. This wasn’t the conversation for relating how fascinating I found it that the state-of-the-art Da Vinci surgical robot with which Dr. Anidjar peeled away my prostate almost a week ago uses two joysticks and multiple foot pedals. It’s a little detail, but so reminiscent to me of the earth-moving equipment I worked alongside as a young student on my summer jobs. Back then I was struck by the delicacy of some of my otherwise rough fellow workers as they scraped earth away from an underground pipe, or smoothed a patch of healing concrete. There was something incongruous in how a mechanical arm could look so forbidding and yet reach out so tenderly.
I never got the chance to see the tenderness that moved the Montreal Jewish General Hospital’s much more refined and technical arms – six alien appendages – last Monday. I never witnessed the very skilled, kind and attentive Dr Anidjar work his art (and I believe it is an art). I would have liked to.
Karl Jasper talks about something called ‘limit situations’, times when you become aware of the very finite boundaries to your own power. Cancer is one of those times. According to my friend and colleague Christine Jamieson, Jasper’s point is that powerlessness creates a boundary situation, a moment when if you’re attuned to it, you can become aware of transcendence.
“For now,” says the nurse on the other end of the phone, “rest easy. Your job is to heal.” I’d like to tell her about the summer evening at age 19, when after a few drinks, I boasted to the back-hoe operator I could do his job, and we took a bet on my trying it. I’d tell her how we drove out to the field where I proceeded to shudder and slam the shovel into wounded earth until finally the operator in disgust made me give up and lose my money before causing real damage.
Experience and artistry: I am glad that the Jewish General surgeons had both. Limits and transcendence: I have experienced both this week, and there is more to write on that.