We human beings find our sense of place by attaching it to stories. “This happened here, and then under the oak trees, or by the prairie slough, or on the top of Mont Tremblant, this other thing happened.” Places without narratives are just spaces, the blanks at the edges of our maps, unknown and unknowable.

Airports, for the sake of safety and convenience, do everything they can to tell the same story everywhere in the world. Boarding pass – security – gate – runway. If it weren’t for the constant human drama – families saying goodbye at the entry, the security fellow flirting with his colleague, the noisy high-school group on their way somewhere – airports, with their standardized everything, risk becoming mere spaces, simple stops on the way to real places like home-towns and vacations, and reunions and the city of your new job.

Here’s what excites me: if it’s the story that turns a space into a place, that means that if we add to the story, we can add to the place. A harmful story, of wrongs done and injustice, can change, at least a bit, in the retelling. We can tell OUR story of that space, and if in our story there is at least some hope, and some openness, and some healing, then maybe… Maybe the place itself changes too.

Still thinking of how it will feel to walk the North West Mounted Police Trail in July. 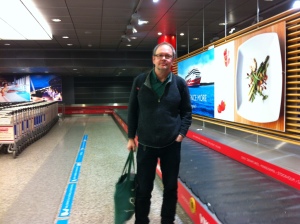 Early in the New Year, for almost 25 years running, I’ve created what I call “memory files” for my family. Setting them up long ago became one of those January traditions, along with packing up Christmas decorations, transferring appointments to the new agenda, and throwing out the December eggnog that seemed like such a good idea to buy at the time. Memory files are hardly a new idea. Maybe you do the same thing. They’re nothing special – just those plain, cream-coloured manila file folders we all use. But with these particular folders, I sit down every January and carefully print someone’s name and the year. Then, throughout the twelve months, if there’s a concert my daughter performs in, a card from a special aunt or uncle, some doodling, a to-do list that really says what’s happening in our lives (pay violin lessons, call re: job offer) or maybe even a little hand-written note – “gone to the store; I’ll be back in twenty minutes”, I might keep it and, at some point, toss it in the file.
I keep one for myself, too. Looking back, it’s interesting how the width of the folders changes, depending on the year. Which means, I guess, depending on where I and my kids are in our lives. From the halcyon years when the kids were young, the file folders are like horns of plenty: spilling with colourful bits and pieces. In those years, scrapbook pages and school drawings and construction paper in bright oranges and blues and reds and greens bulge out of the files, all fighting for attention.
These days, not so much. The files are neater, more organized, and much, much slimmer. There might be a strip photograph of teenagers taken in one of those photo booths at the mall, or a ticket stub from a “One Direction” concert, or a ribbon from a sports event, and not much else. Actually, these days my file is looking thicker than my kids, which doesn’t mean that less is happening in their lives, only that I’m less a part of it. With my grown sons I’ve gone through, already, that awkward stage of not quite knowing why I’m even keeping a file, and then, finally, realising that our daily lives just don’t overlap enough for me to “file” much.
The word “keep-sake” is interesting for what it doesn’t say. Keep for the sake of what? Or whom? For a couple of decades I have been keeping, I suspect, for my own sake more than anyone else’s. At some point soon, I will have to divest myself of at least some of these memories, and it will be up to my children to claim which memories they want to treasure, and which are ready to be let go.
Only a few years ago I found a little box in the storage unit where my father keeps his things. In it were dumped all kinds of detritrus having to do with my young life: the ribbon that I won at a Science Fair in grade six, a photo of a clean-cut little blond boy with a bow-tie that I struggle to see myself in, and more school graduation bulletins than a person can ever reasonably expect a parent to suffer through. But suffer they did, and they kept the papers to prove it.
It was such a pleasure to open that box and sift through its treasures. Some of the memories were painful, but many brought a smile to my eyes. And some of the items brought tears. Our memories of our families are so short. For all the stuff that we accumulate, precious little of it has meaning beyond a generation or two.
But, at least for now, I will keep collecting. It may be that, years from now, some little item that I scrounged from recycling will be picked up by hands younger than mine, turned over once or twice, and with a “well, will you look at this?”, will be shared. And then the circle will be complete, and the memories not just filed, but fulfilled.