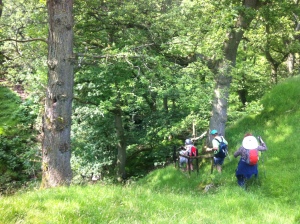 Some fences mark a human boundary, some a physical frontier. This fence was one of the latter. Instead of keeping apart two rocky fields that are otherwise indistinguishable, or two similar flocks of sheep, the fence at the lower field boundary marked a sharp dividing line between field and forest, between hillside and deep valley, and between sunlight and shadow.

Our group of six crossed the stile, the first across uncharacteristically waiting on the other side of the fence until we were all together. By unspoken consent joviality had been replaced by solidarity. The overgrown path and lack of certainty made us pack animals.

For someone who grows up in the Canadian west, crossing a fence inevitably means grasping strands of barbed wire in hand, stretching the space between the lowest and middle strands as wide as possible, and then squatting and pivoting your back end while you lift a foot and squeeze through, back straight and derriere high, in hopes that no piece of shirt or pants will catch a barb and tear. There are very few stiles in Canada because there are very few public walking paths on private land. In England the history of the stile and the history of the citizen fight to keep public paths open are one and the same. Most UK stiles – certainly the ones we crossed – are built by property owners under legal compulsion.

Most stiles are ingenious in their simplicity. Usually, they consist of a post and a step on both sides of a fence: one step up, then hold the pole for support, swing one leg over to the step on the other side, then the other leg, and Bob’s your uncle. With a stile there’s no need to remember to close a gate, and there’s never any concern about a jammed lock or unworkable mechanism. The livestock have no chance to get out and repairs consist only of replacing a board every few years. The wooden step stile may be primitive, but it’s hard to improve on a model of such basic efficiency.

Perhaps my favourite gate is the one on St. Cuthbert’s Way, at the dry-stone fence, edged by thistle and grass, that marks the border between England and Scotland. It was a bit lonely a location, on the top of a knoll and across a valley from a Bronze Age ring fort, but the day I reached it I felt a sense of occasion crossing, and missed having someone there to share it with. There should have been a pub, as there had been, and a good one, back in Kirk Yetholm. Instead there were cattle, and stinging nettle, and burnt-yellow grass, so I kept on.

Another common form of fence crossing in the UK is what is known as the ‘kissing gate’, so called because there is a gate in the fence that swings free between two fixed posts, just to the point of being able to touch, or ‘kiss’ each post. If you were looking at a kissing gate from above, you would see a walker step to the gate, push it against the far post, step into the small space at the open end of the “vee”, then push the gate back against the post just crossed, and exit through the cleared path on the other side. The point of a kissing gate is that a person can step into and through the pocket that is protected from the swing. But any four-legged creature cannot.

For the walker, the most reassuring thing about a stile or a kissing gate is that it’s proof, physical evidence in wood and sometimes steel that this is, if not the path, at least a path intended for walkers. From where it crossed the fence into forest, the Northdale trail we had decided to take led sharply downhill. As our eyes adjusted to the gloom we stepped carefully over exposed roots and clean river stones that skittered and clattered and slid underfoot. There was a close, fragrant feel to the air. I could feel the suddenly coolness on my skin; despite the trees there was a slight breeze from the north; the valley acting as a funnel for air from the high moor country, perhaps from whatever springs fed the stream we could hear below us.

For a path we had chosen because of a lack of options and not for any particular markings, this one at first seemed quite promising. When we had walked only a short distance we saw that were stairs cut into the earth and banked by wood, and because of the steep descent someone had installed first a wooden railing, then a rope alongside the path at waist height. Just when we were feeling heartened the stairs split, each path descending a different direction. It was the classic dilemma: left or right? We chose left, descending another two sets of earthen stairs to a wooden bridge that couldn’t have been more than a few decades old. The stream would likely have been passable without the bridge by jumping from boulder to boulder across the pools and alternating rapids, but the cool forest air and shadow meant that most of the rock surface was slickly moss-covered. Boots would not have held. Someone would have gone in, or bruised or snapped a bone.

On the far side of the bridge was an ascent as steep as the bank we had just come down. After a few yards of climbing, the path disappeared under high ferns. We slowed, wading through the green, unwilling to risk falling into a hole, or worse, down some unseen rock face. For a few minutes we slowly tested the brush for any hint of trail, but it was clear no one had been through in some time. Whatever path was once there had disappeared. We turned back, first descending to the bridge, then back up again to the forest junction, somewhat anxious. Now there was only one option.

2 thoughts on “Stiles and Kissing Gates”