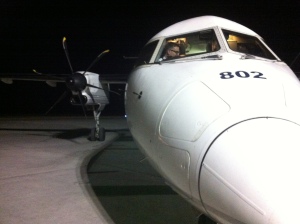 ‘I can’t believe you almost stole that scarf,’ the woman in the airplane seat across from me says to an older woman who must be her mother. The two chortle. They like each other, clearly. ‘Well, it just got stuck on the end of my purse,’ the mother laughs back. ‘Is it my fault it was hanging there? I didn’t even see it until the alarm went off!’ She turns, maybe just a bit flirtatious with the giddiness of a weekend away in the big city with her daughter. “Look at me – I’m hardly the type!”

The cabin crew dim the lights shortly after our take off to Sudbury. How miraculous it is to hang thousands of feet above a huge city at night. To watch the glow of human achievement stretch away to every horizon in magnificent strings and squares of bright fires. However snide we Montrealers might sometimes be about Toronto, how impressive is this city on the edge of the Great Lake, how vast a plain of light, of movement and life. And how strange to be a descendent of savannah dwellers, not barefoot and on the ground but suit-jacketed and seat-belted and in the air, climbing Jacob’s ladder like the angels he only dreamt about. Listening to the turboprops whistle, eating almonds, watching from this incredible vantage point I realize that, when you think about it at all, this is so new in human history that however banal it might sometimes feel, we are still among the first generations to be privileged to experience it.

The root meaning of ‘pilgrim’ is stranger, or foreigner. Not all strangers are pilgrims, perhaps. But I think all pilgrims must in some way be foreigners. And to hang in the air at night, above a city, watching the lights….? That is foreign indeed.

It is perhaps because I am a stranger that I noticed the man who now sits in the seat three rows back. Nervous hands, rolling his thumbs against his fingers as they checked out his boarding pass, walking awkwardly, so tall his head, even bowed, slid along the ceiling of the cramped cabin. Unusual black pants and boots. Or the woman one row up and to the right, in a business-jacket, like me a bit unkempt, who had a resume out in the lounge, and is now tapping it absent-mindedly with her pen while looking out the window. An academic, almost certainly, on her way to an interview. Or the child, ten or eleven maybe, trying to take up as little space as possible, perhaps on her way to meet a divorced parent with weekend parenting rights. So much life and drama in such a small metal tube. Life at 8,000 feet and climbing.

There is one light in particular that catches my eye with its brightness and unusual movement. It takes me a minute to realize that it is not, like all the others, following one of the lines that demarcate streets and highways. The way it’s crossing the city, it must, like us, be in the air. Another plane, below us? I watch it move sideways to our path. And then, abruptly, it stops. What?

The flight attendant interrupts my reverie. Your drink? she says. But it’s not a question. I realize that she must have memorized the orders of all twenty or so people on the plane, without paper or pad. I take the glass, turn back to the view. The bright light is still there, still immobilized. Did I miss something? Planes don’t just stop, and there’s no dark strip of a runway. A helicopter, maybe? How strange.

‘So, do you live in Sudbury?’ asks the older woman beside me, when we land and it’s time to get off. 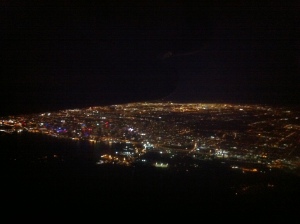 2 replies on “A Stranger to These Parts”

“I thought so”… I wonder what tipped her off?

Not sure Allen…..Herbert is such a small town it might just be that she didn’t know me!