There were times, walking, where I forgot about our guides on the trail – the North West Mounted Police  markers that Everett Baker put up in 1960 and 61. After all, that was over 50 years ago. Even eight foot concrete posts don’t always last that long, when neglected. We couldn’t always find them. Sometimes they’d been knocked down by cattle or vandalized. And sometimes, to avoid walking on crop, or because they haven’t been seen for decades, we just couldn’t find them. But Hugh, who is responsible for the posts on behalf of the SK History and Folklore Society, always had them in mind. In our three weeks of walking we found about 25 that were not on their maps or databases. Every time Hugh would kneel by the post and get the GPS coordinates for their survey. More than once he looked like an old-time pilgrim, kneeling at a roadside shrine. Which, in a sense, those posts are.

The magnificent post photos were taken by Branimir Gjetvaj, whose photography website is http://www.branimirphoto.ca. The photo of Hugh kneeling is mine. 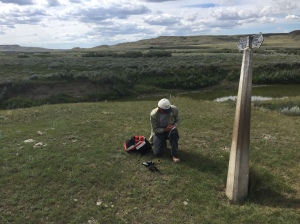 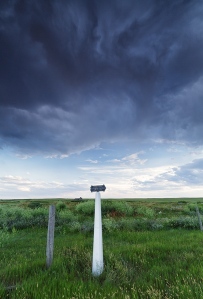 5 thoughts on “markers on the way”