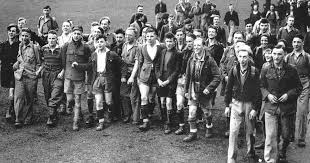 This morning I’m nursing an incision from my recent hernia surgery. But as I drink tea in Nottingham, walkers in England’s Peaks District, just a short distance away – including our friend Meredith Warren – are right now adjusting backpacks, filling water bottles, and scanning the Kinder Scout headlands. They’ll stop at the quarry where, on Sunday April 24, 1932, Benny Rothman (who arrived by bicycle to avoid police at the train) gave a rousing speech and led about 500 young people in the “Kinder Scout Mass Trespass.” That original protest might have been forgotten, except for the arrest of five of the Ramblers; Rothman got four months in prison just for his speech. The resulting public outcry led, eventually, and after much more protest, to the beautiful, wide-open British Parks that so many now enjoy, and the “Right to Roam” allowing limited public access to private land.

I climbed the 2000-foot Kinder Scout rise on a hot day last year. Oddly, the two people with me were both Canadians I had just met (we had that awkward moment in the bakery when we just had to ask, since our accents sounded so much “like home”). Between breaths we talked about whether a “Right of Responsible Access” would work in Canada. I’m convinced it would, and should: not only was much of North America an Indigenous “commons” before European contact, Settlement, and expulsion of First Nations, but for those of us who are European-background, our own histories and cultures often have clear antecedents for “everyperson’s right”. It’s ironic that the very descendants of the Irish, Scots and English who had been violently “cleared” from their commons lands by landowners so often went on to do exactly the same thing to Indigenous peoples.

We Canadians can do better. The examples are before us. National Trust’s website for Kinder Scout states “walk in the steps of the trespassers and enjoy what others fought so hard for.” We have important, historic trails on private lands on Turtle Island, too. They need limited, responsible, public access –  in my upcoming book with University of Regina Press I describe our experiences walking some of these incredibly important paths. Teaching ourselves and our children that land is a common good, requiring care, will make us all healthier and happier. Reconnecting with land – our own form of Kinder Trespass – helps those of us who are Settler be better prepared as Treaty partners with those whom our ancestors also “cleared” from the lands we call home.

See my article on “Why Canadians Need the Right to Roam” at: https://theconversation.com/why-canadians-need-the-right-to-roam-100497 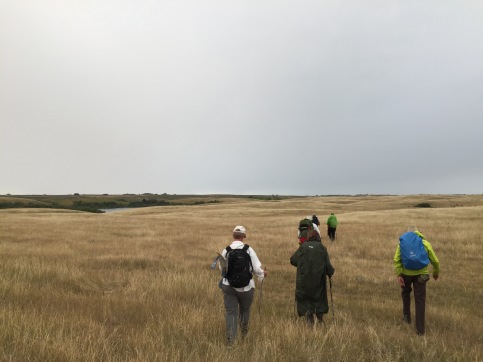 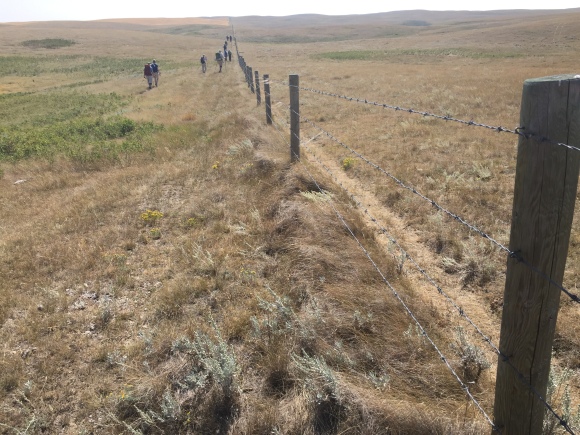 There are a lot of misconceptions about the Right of Responsible Access, or the “Right to Roam”. A friend of mine in Saskatchewan recently said her farm was broken into a number of times despite the fact they installed cameras. “I don’t think Right to Roam is a good idea,” she wrote me. That’s terrible. But the fact is, “Right to Roam” doesn’t allow people to break into buildings. Unfortunately, putting up more NO TRESPASSING signs won’t stop crooks, either… they already know what they’re doing is illegal. Whether the government of SK adopts responsible access, or (as seems more likely) accepts the association of rural municipalities’ request for tighter trespassing laws, either way, nothing changes when it comes to farmer’s yards and buildings. Breaking in is illegal already. In countries like Scotland, if anything, the laws got tighter when the Right of Access came in.  The two problems in Saskatchewan, and elsewhere, are a “they can go to hell” culture, and a lack of enforcement of EXISTING laws.

THE EVIDENCE            The idea is to reduce property damage and theft and to live in healthy communities. Everyone agrees. So what’s the evidence? Evidence-based arguments show that, in Finland, Norway, Scotland, Sweden, and Iceland, countries that are quite similar to Canada with northern climates, and small populations spread over big areas – in those countries increasing access, rather than decreasing it, is what decreases rural crime, vandalism and littering. Increasing access actually puts more sympathetic eyes on the land, rather than fewer. It increases public interest and public attention. Criminals don’t work out in the open. They dump their garbage, or deface a wall, or break through a lock, when no one is looking.

CHINOOK PARKWAY   I grew up in Swift Current SK. There’s a trail along the Swift Current Creek called the Chinook Parkway. It wasn’t there when I was a kid.  I spent a lot of time along that creek looking for garter snakes and later, golf balls. But the area was always dirty and dangerous. There were too many broken beer bottles in the long grass – no one cared. If Swift Current had put up a fence along the creek and increased fines tenfold it wouldn’t have stopped kids from breaking bottles and starting campfires and leaving garbage. Police can’t be everywhere. But creating a public access space in the Chinook Parkway where people walk and jog and cycle has put more people out in the open. It’s made the river’s edge – and the city – healthier, and better, and safer.

GRADUAL CULTURAL CHANGE           You don’t make a rule and expect it to change everything, you try to change the culture gradually. What option will create greater, and healthier community for Canadian people? Does the higher the fence mean the better the neighbour, really? In Norway and Sweden and Scotland and Finland and Austria and some other countries, there’s a whole culture where people are trained up, from childhood, to know how to be on the land – how to respect crops, and animals, and fences, and private buildings. They know how to pick berries or mushrooms and respect property at the same time. Sure, it doesn’t happen overnight. But the question to ask ourselves is: what will be the direction that bringing in a new piece of legislation will take us?

LIABILITY:        Some landowners will say: well, we could never have the Right of Responsible Access in Canada because some city person would come out here and fall down a badger hole and before you know it I’d be sued. FALSE. In Scotland and in other countries where they’ve brought in such laws, at the same time they passed laws protecting landowners from lawsuits. It wasn’t difficult. In those countries, it’s nearly impossible for someone to sue a landowner for personal injury while exercising responsible access. The only exception would be if the landowner willingly and intentionally set some kind of trap for walkers. Shy of that, they’re protected. For more on this, and on the evidence for crime rates, see “This Land is Our Land” (a terrible title, but a good book), by Ken Ilgunas.

THE QUESTION:          So the question is: what kind of future makes for better community? Do you want to live in a land where there’s more fear, more danger, where if you break down on the road you’re afraid to go and ask for help? Or do you want you and your children to grow up in a land where landowners are respected and yet at the same time, everyone feels a connection to, and a responsibility for, the land? Where people can stop by the side of the road and pick chokecherries or saskatoons or raspberries, or have a picnic (making sure to pick up their garbage). Where city dwellers understand some of the problems of farmers and ranchers, because they actually know something about the land and have met the people? The more people feel a connection to the land, the way farmers and ranchers do, the more everyone – even urban people – act as allies. Fences don’t make people safe. Good relations do.