Tomorrow, September 16, is the feast day of Saint Ninian. In July, together with Christine Ramsay, Ken Wilson, and Sara Parks, I walked the Whithorn Way in Scotland, the medieval Royal pilgrimage route to St Ninian. To honour Saint Ninian Day here’s a short video of that pilgrimage! 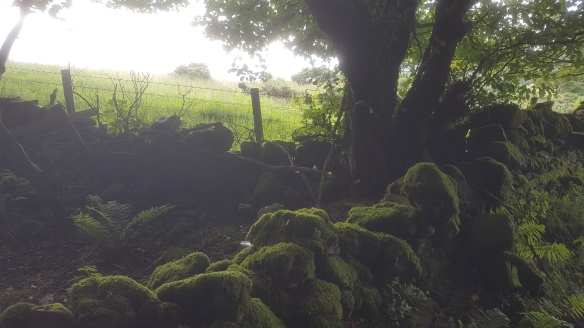 “During the time of the Enclosures,” Peter Ross told us, “they just ripped up the prehistoric hill tombs to use the stones. So when you see these stone fences you may be looking at ancient history – pieces of a paleolithic grave.” Today started out lovely, but by early afternoon turned into another cold, wet, miserable afternoon. The barometer in Glenluce announced storms,

and we ended our 15 miles with sodden boots, frozen and shivering from a cold and steady Scottish wind.

We crossed the Galloway Moors in a solid drizzle interrupted only by cattle, horses, sheep, goats and rams. Some of whom were in a hurry to get past us on the narrow tracks. 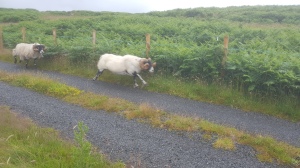 If there was a theme to the day, it was the incredible human history of Galloway, this sparsely-inhabited piece of Scotland responsible for 40% of its cattle, most of its lumber exports, and – according to Peter, who joined us – most of Robert the Bruce’s army. Peter met us at the remains of Glenluce Abbey. He told us he would do his best to speak “standard English,” but couldn’t help flipping into an “Och, aye” when he got excited – as he often did – about the subject of paths and people in this part of the country. 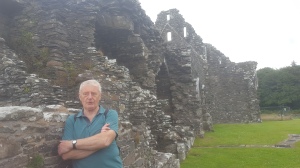 At times I’d only figure out what he was saying a few sentences after he’d finished. But it was the most fascinating compendium of history and politics, things like the fact that path rights on the seacoast had to take into account Robert the Bruce’s unusual title to his troops, that they owned the sea “as far as you can throw a spear out into the surf.” The Whithorn Way took us by the Abbey, whose stones were ripped down by locals during the Reformation to build the neighbouring farmhouses and the Lord’s manor. We walked by two different Lochs (lakes) where Peter pointed out islands that were, in the late bronze age, Crannogs.

A Crannog is an artificial island built by a stone or bronze-age family which pushed alder trees down into the mud, then filled them in with rocks and stones so they had a home relatively safe from attack in the middle of the lake. Archaeologists can radio-carbon date and ring-date the trees used in building these islands to determine when the ancient Picts built these island homes.

Our safe and secure home last night was Nadav’s Shed, where we had a comfortable sleep, interrupted in the early morning only by neighbourhood roosters, and visited by little rabbits. There was no accommodation on the trail itself, so tonight we were picked up off the moors by the owners of the Craighlaw Arms Hotel. They kindly dried our clothes for us and served some of the best food I’ve had in a long while. Haven’t had veggies for days, so the ginger chicken stir fry with Thai yellow curry was extraordinary. Tomorrow is supposed to be a short day. I’m hoping it’s as sunny again as these photos I took when we started out this morning south from New Luce. 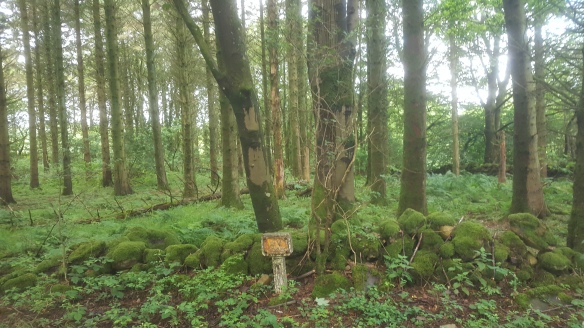 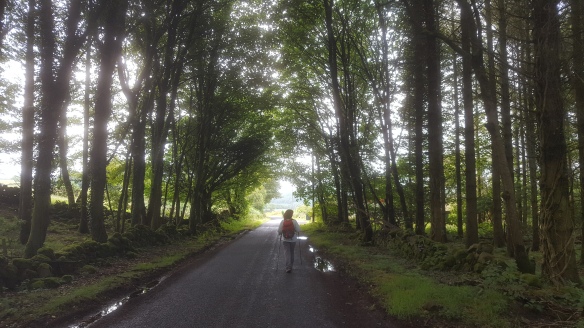 for more on this day’s walk, and a different perspective, see Ken’s blog at https://readingandwalking.wordpress.com/2019/07/19/whithorn-way-day-four