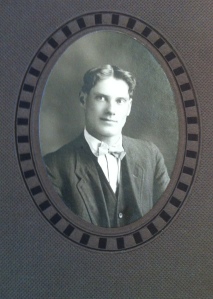 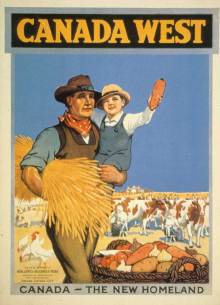 This week I’ve been seeing some of the old photos of my grandparents and their parents before them, and hearing stories of the first European settlers on this prairie. My grandparents, like most of their neighbors, were hard-scrabble, tough immigrants. Before electricity, before water lines, before roads even, they came. They came for the promise of land. Most of them were not as romantic about the countries they had left as we, their grandchildren, are. After all, they’d made the decision to go. In the words sung by Archie and the Boys (see below), the old time band that played today at my father’s care home in Herbert SK, they wanted, not the old, but the new: their own ‘piece of gloryland’. And the Government of Canada was happy to promise it to them.

The posters advertising the new homeland, however, neglected to mention that there were already people living here. The nomadic First Nations and mobile Metis were not used to, nor invited into, this new world of fences and property title and cattle rather than bison. A combination of starvation and forced removal cleared the land of Aboriginal peoples so that my grandparents – more fortunate pawns, but pawns nonetheless – in a continental political-economic development scheme, could take their place.

Did it turn out to be Gloryland? Saskatchewan is a great place. But we are all – First Nations and settlers alike, but particularly First Nations, still feeling the aftershocks of that great removal. To me, the posters advertising a new homeland in the Canadian West for European immigrants aren’t just art. They’re chilling propoganda.

(Photo is of John Samuel Golling, my grandfather. Thanks to Archie and the Boys for their music and their permission to post!)